Methyl B12 includes a concentrated and bioavailable
source of two key B vitamins- B12 and folate. Each tablet
provides 5,000 mcg of methylcobalamin and 1,000 mcg of
folate as Quatrefolic® (100% 5-MTHF).

Vitamin B12 works along with folate in many body processes. These include increasing metabolic energy and red blood cell production, supporting mood regulation and cognitive function, up-regulating methylation, increasing DNA synthesis and repair, and supporting the formation of the protective myelin sheath, the insulating exterior that speeds up nerve cell transmission.

Adding significant synergy to this formula is the methylated form of folic acid, 5-methyltetrahydrofolate (5-MTHF). 5-MTHF activates B12 in the body by donating its methyl group to cobalamin, forming methylcobalamin. 5-MTHF requires the enzyme 5-methylenetetrahydrofolate reductase (5-MTHFR) in order to be converted from folic acid into its active form, 5-MTHF. Enzyme defects, malabsorption and congenital deficiency of 5-MTHFR can result in an impaired ability to activate folic acid. In individuals with a genetic defect of this enzyme, supplementation with 5-MTHF may be the preferable form of folate supplementation.

Vitamin B12 plays a large role as a cofactor in enzymes involved in the metabolism of proteins, fats and carbohydrates, and is required to produce succinyl CoA, an intermediary in the Kreb’s cycle that generates cellular energy in the form of adenosine triphosphate (ATP). Due to its role in the production of ATP, vitamin B12 deficiency is often characterized by fatigue and weakness. Supplementation with methylcobalamin and 5-MTHF has been shown to promote increased energy levels.

Homocysteine is a molecule which is synthesized in the body from the amino acid methionine. Maintaining healthy homocysteine balance is crucial for supporting arterial and cardiovascular health. Both 5-MTHF and methylcobalamin are required to maintain optimal homocysteine balance. 5-MTHF acts as a methyl donor, providing a methyl group to vitamin B12. The methylated form of B12 (methylcobalamin) then transfers the methyl group to homocysteine, resulting in consistent recycling of homocysteine to methionine. In addition to supporting homocysteine recycling, 5-MTHF and methylcobalamin support healthy arterial blood flow by increasing nitric oxide production. In a six-week, randomized, crossover study of 52 individuals, folate supplementation (5 mg/day) significantly improved flow-mediated dilation of the brachial artery.

B12 has been shown to be beneficial for maintaining a positive mental outlook because it acts as a methyl donor and increases the synthesis of s-adenosylmethionine (SAM-e), a nutrient that has powerful mood and sleep-cycle regulating properties. Due to B12’s ability to increase the production of neurotransmitters and nerve cell transmission, B12 has been shown to improve cognitive function. 5-MTHF plays a significant role in mood regulation as it is required as a methyl group donor for the production of neurotransmitters such as serotonin.

Methylcobalamin and 5-MTHF are both required nutrients for the biosynthesis of melatonin, the hormone that helps induce sleep. Within the central nervous system, the neurotransmitter serotonin is converted into melatonin in a pathway that requires the donation of a methyl group. Several studies have demonstrated that supplementation with methylcobalamin modulates melatonin secretion and helps to normalize the sleep-wake cycle.

1 tablet per day or as recommended by your health care professional. 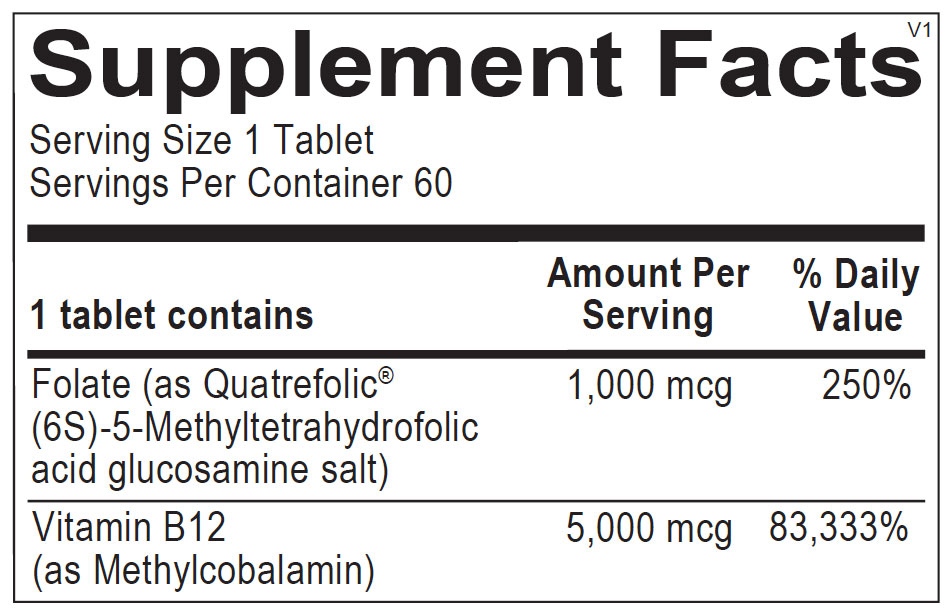