Omega-3 Fish Oil is a high-concentration fish oil sourced from waters off the Chilean coast. As the world’s least industrialized coastline, these cold, fresh waters provide the cleanest, most sustainable source of fish in the world.

Omega-3 fatty acids are essential cornerstones of human nutrition. They are deemed “essential” because we need them for proper health, but cannot produce them on our own. We must therefore consume these fats through diet or supplementation. Omega-3 fatty acids are required for a number of body functions, from proper blood flow to brain development. These long-chain fatty acids are integral components of tissues and organ systems throughout the body, including the heart, skin, joints, eyes and immune system. In nature, omega-3s occur as alpha linolenic acid (ALA), found mostly in plants, and as long-chain EPA, DHA and DPA which are primarily consumed from coldwater fish. The body is able to slowly convert the shorter chain ALA to the more active long-chain, EPA, DHA and DPA, making a higher dietary intake necessary. In addition, major changes in modern diet over the last century have led to a decrease in the general consumption of omega-3 fatty acids. Since omega-3 fatty acids are known to benefit cardiovascular health, support healthy brain function and cognition, and have also been proven to maintain normal inflammatory balance, achieving the proper balance of omega-3s has become an important health strategy, requiring supplementation for most people. The American Heart Association recommends that those concerned about blood lipids take up to 4 g of omega-3 fatty acids per day.

While the amount of EPA, DHA and DPA provided in a fish oil product is important for efficacy, the type of fish oil delivered is another significant factor in defining fish oil effectiveness. The human body is accustomed to digesting and absorbing EPA, DHA and DPA in the triglyceride form. Even though triglyceride-based fish oils are the preferred form for superior fish oil absorption, the vast majority of fish oil products available on the market are in the ethyl ester form. While ethyl esters allow for higher concentrations of EPA and DHA to be achieved, their unusual structure is resistant to the digestive enzymes (lipases) that enable fat breakdown. In a study comparing EPA and DHA digestion in both the natural triglyceride and ethyl ester form, five common digestive lipase enzymes were shown to more readily digest fish oil in the natural triglyceride as compared to the ethyl ester substrate.3 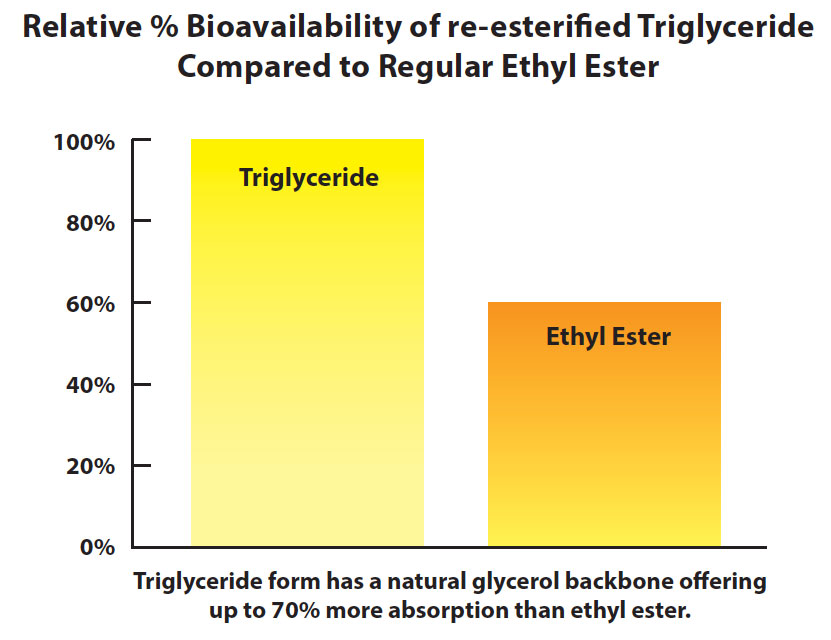 An accumulating body of research shows that the typical Westernized diet does not provide a sufficient amount of omega-3s for optimal health. Additionally, insufficient conversion of ALA to the active EPA and DHA may reduce the amount available for use in organs and tissues. Symptoms of omega-3 deficiency are common and often overlooked. These may include dry, itchy or flaky skin, poor sleep quality, poor circulation, eye discomfort, and mood imbalance.5 Most of the studies over the past three decades have focused on EPA and DHA. In recent years, however, research has looked at DPA, the intermediate between EPA and DHA and the role it plays in our health. DPA collects in a variety of tissues including the liver, breast, brain, eyes, heart and red blood cells and is the intermediate between EPA and DPA. This, combined with the retroconversion of DHA back to EPA, suggests that DPA may be a reservoir for both EPA and DHA, thus increasing the storage of EPA, DHA and DPA and in turn, the beneficial healthy effects, of omega 3 fatty acids. The roles associated with DHA and EPA in supporting metabolic processes, neurological development, and maintaining inflammatory balance may, in part, be attributed to DPA. Each soft gel of Orthomega 820 contains 50mg of DPA.

Omega-3 fatty acids have long been known to benefit cardiovascular health. The well-known GISSI-Prevezione trial found that just 1 g a day of omega-3 fatty acids had a significant impact on cardiovascular health after three to four months of consumption.6 EPA, DHA and DPA have been shown to modulate levels of fat in the blood,7 and a meta-analysis of 31 placebocontrolled trials found that for each gram of omega- 3s consumed, there was improved support for healthy blood pressure levels already within the normal range.8 Population studies have also reported that omega-3 fatty acids support better blood sugar balance in populations consuming large amounts of the n-3 long-chain PUFAs.

A double-blind study, which randomly assigned participants with low mood to either placebo, 1 g/day or 2 g/day of EPA, found significant improvement with EPA compared with placebo in balancing mood.

In a recent British study, omega-3 blood levels were shown to be directly related to improved measures of cognition, performance and behavior among healthy children with below-average reading ability.

A dose of 1,200 mg per day of omega-3 essential fatty acids were found to improve back and joint discomfort from exercise or overexertion among 125 people, with 88% choosing to continue supplementation after the study’s end.12 Fish oil has also been shown to improve similarly tender joints and morning stiffness after three months of consumption.

A study evaluating the long-term effects of EPA and DHA on visual development in 136 school-age Inuit children exposed to high levels of n-3 PUFAs during gestation, found beneficial effects of DHA intake on visual acuity. Eating oily fish at least once per week compared with less than once per week was also found to enhance visual clarity and help support healthy macular aging.

1 soft gel capsule per day or as recommended by your health care professional. 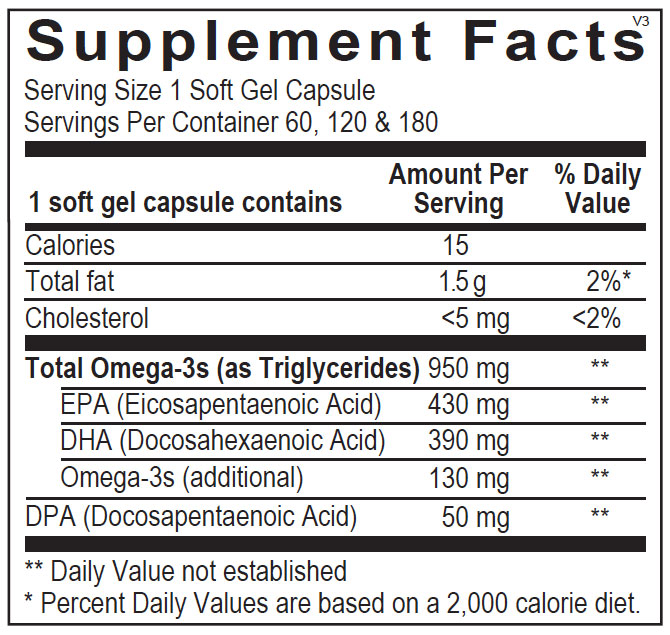