While vitamin D has long been known to assist calcium
absorption, it is vitamin K, through its carboxylation of
osteocalcin, which guides this calcium to bones and prevents
their absorption into organs, joint spaces and arteries.

While vitamin D has long been known to assist calcium
absorption, it is vitamin K, through its carboxylation of
osteocalcin, which guides this calcium to bones and prevents
their absorption into organs, joint spaces and arteries. Vitamin
K occurs in 2 main forms: K1 (phylloquinone), derived from
foods such as green leafy vegetables and K2 (menaquinone),
which is a group of related compounds differentiated by
their side chains. Numerous studies have shown that vitamin
K2 is the more bioavailable form of the nutrient7, and more
powerfully influences bone building than K1. In addition,
though both reach the liver, most of the K1 is used for purposes
of coagulation, with little left over to support the body’s needs
elsewhere.8 The profoundly different degrees of bioavailability
between K1 and K2 is due to their differences in structure;
only 10-20% of vitamin K1 that is absorbed from food even
reaches the circulation, while the long side-chain of vitamin K2
allows it to bind with fat particles in circulation and facilitate
its arrival at soft tissue, bones and arteries. There are two forms
of vitamin K2 commonly used in supplements: MK-4 and MK-7.
The MK-7 form has been shown to have six times the activity
of MK-4 in the blood. MK-7 has also been found to remain in
the blood approximately nine times as long as the MK-4 (eight
hours versus 72 hours), making it the optimal form of K2.
The addition of MenaQ7® PRO to this formula is backed by
extensive research. Dr. Leon Schurgers, world-renowned expert
in vitamin K2 as MK-7 research for cardiovascular and bone
health, and his team of research scientists have conducted
over 15 clinical trials on MenaQ7® PRO through the University
of Maastricht.

Although most people consume adequate dietary vitamin K
to maintain sufficient blood clotting, most do not consume
enough to meet cardiovascular and bone health needs. In fact,
approximately 70% of the western population is deficient in
vitamin K2. Compromised intestinal absorption can also lead to
insufficient K2 levels leaving calcium available to be exported
out of bone and into other tissues. Other medications such as
antibiotics, cholesterol-lowering medications, and laxatives have
also been found to contribute to a deficiency of vitamin K.

Building and maintaining healthy bones requires a number of
key nutrients including vitamin K, for the proper binding of
calcium to the bone matrix. A 2005 study from northern Finland
found that those with greater levels of vitamin K-carboxylated
osteocalcin had stronger bones than those with lower levels
of the protein. A Japanese study found superior bone health
among women who were frequent MK-7-rich natto eaters
than those who were not.11 Another randomized study which
split 172 women into a vitamin K2 group, a vitamin D3 group,
a vitamin K2 and D3 group, and a placebo group for two years
found that the combination of vitamin D3 and K2 had the
most benefits for supporting bone health among the groups.12
Cardiovascular Health and Blood Sugar Balance†
Vitamin K plays a key role in supporting the cardiovascular
system as well as blood sugar balance already within normal
levels. In a large population study, researchers found that those
who consumed high amounts of K2 had significantly better
cardiovascular health markers compared to those given vitamin
K1.13 Studies have also shown vitamin K supports healthy blood
sugar metabolism.

New evidence also suggests vitamin K plays a central role in
balancing immune health. Recent studies have shown that
both vitamins D and K impart immune-modulating effects. In
the Framingham Offspring Study, one of the longest standing
studies on generational health, higher serum levels of vitamins
D and K were associated with stronger immune function and
a balanced inflammatory response. In a 2011 study, vitamin K
was also found to suppress various markers of the immune system.

1 or more drops per day or as recommended by your health
care professional. Can be taken directly on the tongue or
mixed with the beverage of your choice.

Do not consume this product if you are pregnant or nursing. 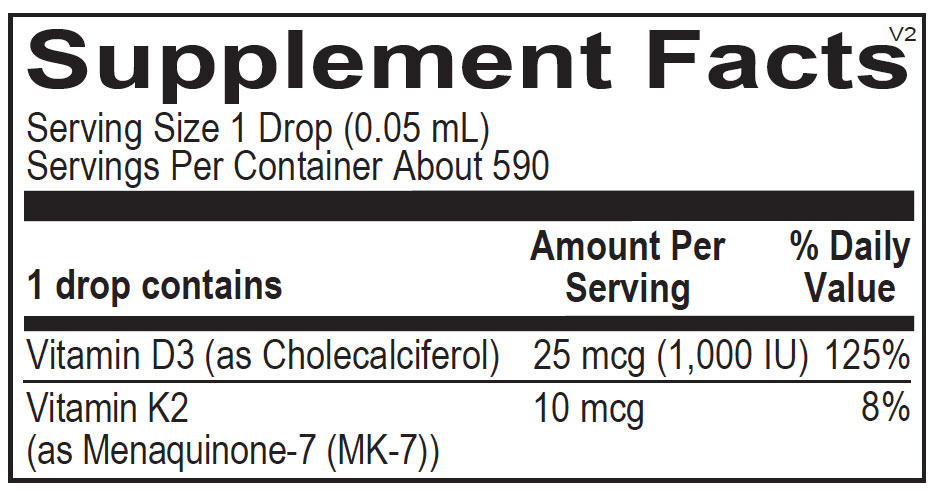